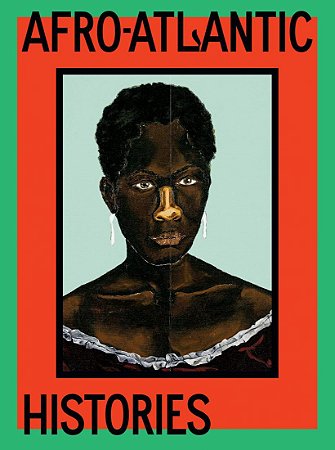 Edited with text by:
Adriano Pedrosa and Tomás Toledo

Afro-Atlantic Histories brings together a selection of more than 400 works and documents by more than 200 artists from the 16th to the 21st centuries that express and analyze the ebbs and flows between Africa, the Americas, the Caribbean and Europe. The book is motivated by the desire and need to draw parallels, frictions and dialogues around the visual cultures of Afro-Atlantic territories—their experiences, creations, worshiping and philosophy. The so-called Black Atlantic, to use the term coined by Paul Gilroy, is geography lacking precise borders, a fluid field where African experiences invade and occupy other nations, territories and cultures.

The plural and polyphonic quality of “histórias” is also of note; unlike the English “histories,” the word in Portuguese carries a double meaning that encompasses both fiction and nonfiction, personal, political, economic and cultural, as well as mythological narratives.

The book features more than 400 works from Africa, the Americas and the Caribbean, as well as Europe, from the 16th to the 21st century. These are organized in eight thematic groupings: Maps and Margins; Emancipations; Everyday Lives; Rites and Rhythms; Routes and Trances; Portraits; Afro Atlantic Modernisms; Resistances and Activism.