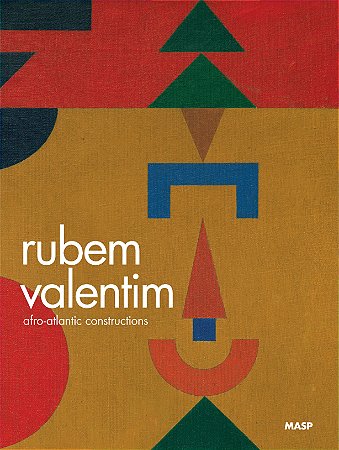 Rubem Valentim: Afro-Atlantic Constructions reproduces 99 artworks by the painter, sculptor and engraver Rubem Valentim (Salvador, Brazil, 1922 – São Paulo, Brazil, 1991), a key figure in 20th century Brazilian art and Afro-Atlantic histories. From the 1950s onward, Valentim incorporated the language of geometric abstraction to create complex compositions that redesigned and reconfigured Afro-Atlantic symbols, emblems and references. In this process, Valentim transformed the European artistic languages that dominated most of the art production in Brazil and worldwide during the 1950–60s (geometric abstraction, constructivism and concretism), blending them with African references, mostly through drawings and diagrams representing the deities of Afro-Brazilian religions—known as orishas—such as Shango's double-edged axe, Oshoosi’s arrow and Osanyin’s rods. In his renowned ‘Manifesto antropofágico’ from 1928—a pivotal text in Brazilian modernism—, Oswald de Andrade (1890–1954) poetically put forward an agenda for Brazilian intellectuals and artists: to swallow and digest the European cultural legacy in order to create—in an anthropophagic way—unique hybrid Brazilian works that would merge indigenous, African and European references. As one of the artists who undertook the anthropophagic project in the most complete and ambitious way, Valentim performed one of the most radical operations in the history of Brazilian art, subjecting a European language (geometric abstraction) to an Afro-Brazilian language. His contribution was effectively singular and powerful, decolonizing and anthropophagic.

IMPORTANT NOTICE
This is the English edition. For the Portuguese edition, please refer to this link: Rubem Valentim: construções afro-atlânticas.